Israel has announced the ban of four-engine aircraft in Israeli airspace, in an effort to reduce noise and air pollution. Whilst the ban is mandated to come into effect from March 2023, it is believed that operators may be discouraged from operating such aircraft even sooner.

Following the widespread demise of the passenger-carrying Boeing 747 following the Coronavirus Pandemic, IBA's Director of Valuations Mike Yeomans reveals that the largest impact is likely to be on converted 747 freighter aircraft operated by Israeli flag carrier El Al.

“According to IBA Insight, around 98% of 4-engine aircraft departures from TLV this year have been freighters. Four-engine passenger aircraft numbers are dwindling, and few still operate from TLV following El Al's Boeing passenger 747 fleet having been withdrawn from service in 2019. According to early reports, there are likely to be some exemptions under a licence agreement – IBA believes such exemptions will be applied to Boeing 747 factory freighters, as there is no viable no-loading alternative aircraft for oversized air freight.” – Mike Yeomans

Instead, we believe the ban will most-likely affect the converted Boeing 747 fleet. This in turn will likely drive demand for the new generation of converted twin-aisle widebodies, including the Boeing 777-300ERSF, which is being developed by Israel Aerospace Industries (IAI) and AerCap. According to IAI, the 777-300ERSF will offer 15% more volume than the 747-400BCF, and 21% lower fuel burn compared with the 747-400F. If more countries and airports adopt similar stances on four-engine aircraft, the 777-300ERSF and its contemporaries should benefit.

The Airbus A350F and the Boeing 777-8 Freighter are expected to enter service in 2025 and 2027 respectively, with the former firmly targeting the replacement market for ageing Boeing 747 freighters. 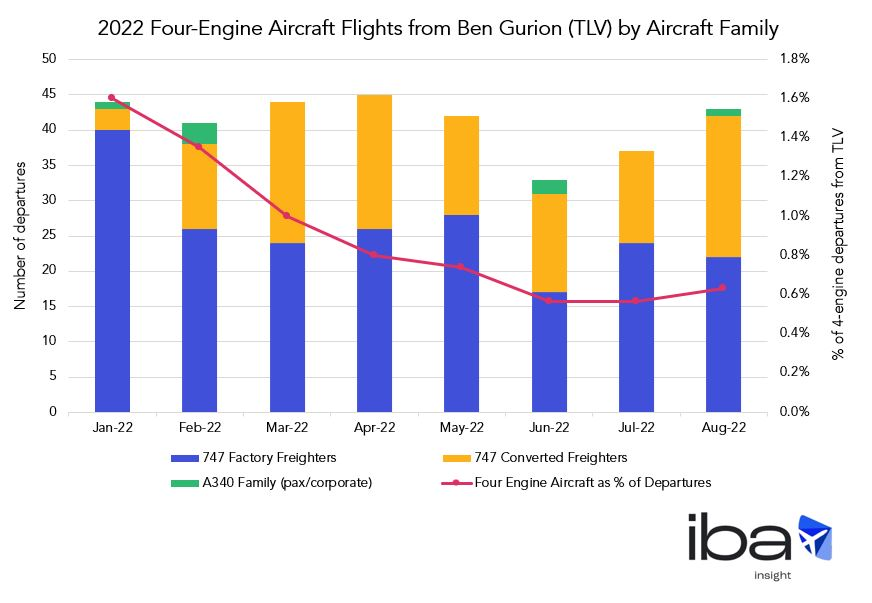 What about the environmental impact?

Sustainability goals and the strive for net-zero emissions has been a key driver in the demise of many four-engine aircraft. The most prolific four-engine aircraft in global passenger operations today is the Airbus A380. The type does not operate into Tel Aviv at present, and there are currently only 122 active aircraft worldwide. Despite this, IBA noted a recent resurgence in A380 utilisation in our aviation Carbon Index, indicating a year-on-year increase of 177% in July 2022.

Carbon emissions data from IBA NetZero reveals that four-engine aircraft represented only 0.8% of departures from Tel Aviv so far in 2022 and have accounted for 2.2% of total CO2 emissions on departing routes.