One key driver of growth has been an ambitious airport expansion project, with some reports suggesting China aims to have 400 airports operational across the country by 2035. This represents an additional 160 airports over the next 14 years. With Chengdu in Sichuan province recently becoming the third city in China to have two international airports (after Beijing and Shanghai) IATA predicts that China is due to overtake the United States as the world's largest passenger market by 2029.

As Chinese aviation continues to grow, a significant growth in aviation-related CO2 emissions has posed increasing challenges to the industry. A study from International Council on Clean Transportation (ICCT) suggests that during the pre-pandemic year of 2019, with unrestricted air travel across the globe, flights departing from China moving over 650 million passengers reported 13% of global passenger aviation related CO2 emissions. Analysis from IBA's InsightIQ Carbon Emission Calculator (CEC), shows that emissions on a per seat per mile basis from China's emerging economy are relatively low in comparison to nations such as the US, UK, Germany and Japan. Data from the CEC also shows that China has managed to keep CO2 emissions per flight lower than these nations.

According to InsightIQ data, CO2 emissions per seat mile and per flight in China appear to be falling in line with objectives laid down by the Civil Aviation Administration of China (CAAC) in 2008. The broad objective of these being to spread overall awareness of green initiatives and trickle up innovation between 2011 and 2021. This can also be seen by the decline of emissions per seat per mile, emissions per mile and emissions per flight of about 1.5-2% year-on-year.

How has the Chinese aviation industry acted to reduce CO2 emissions?

China has managed to keep its emissions relatively under control in comparison to the vast scale of daily passenger movements. Specific initiatives at airports, airlines and infrastructure have been key in driving this.

We used data from our Carbon Emissions Calculator to examine total CO2 emissions from China's 10 busiest airports, and compared them with global airports of a similar scale. We conducted a further study which revealed that overall, China has managed to keep emissions under control when compared to overall passenger numbers.

With the recent drop in COVID-19 cases in the Guangdong Province compared to other parts of the country, operations at Shenzhen Bao'an Airport (one of the biggest cargo hub airports) resulted in only a very small carbon emissions drop from 2019 to 2020. 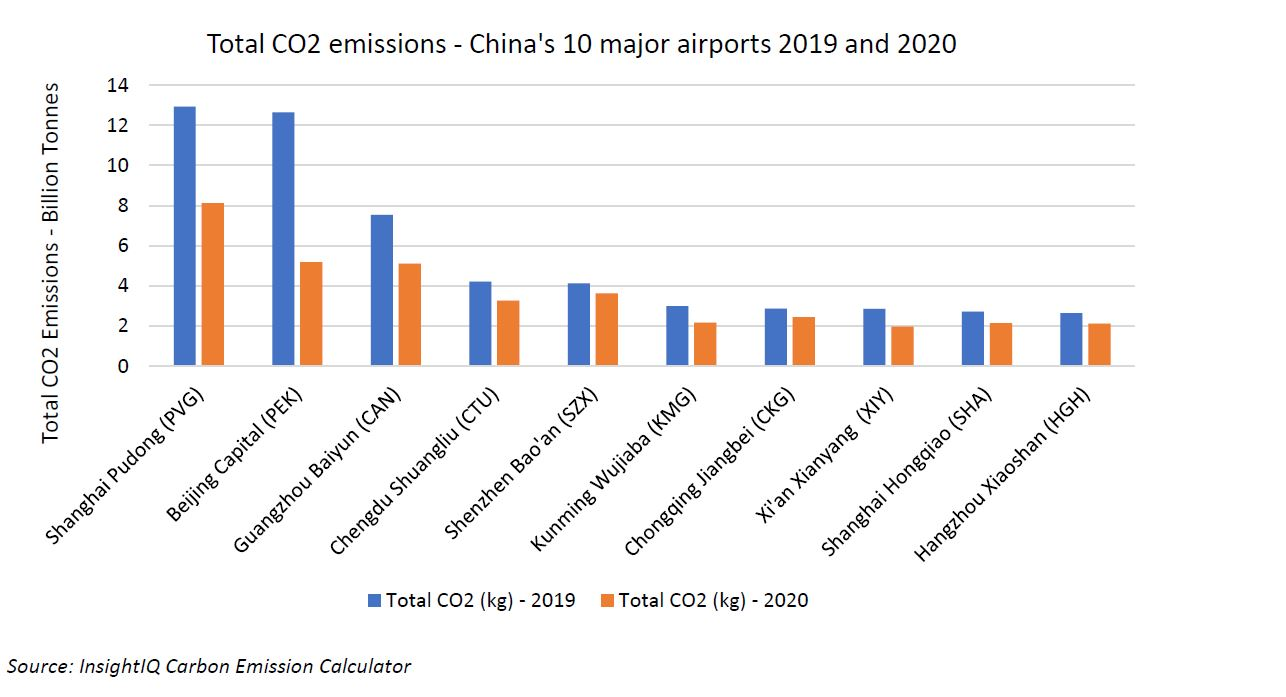 How are Chinese operators performing?

Insights from our Carbon Emissions Calculator suggest that the top 10 operators (in terms of number of flights and passenger movement) in China have presented an average of 2% reduction every year in per seat per mile emissions from 2018 to 2021. Most notable were China Southern Airlines, Sichuan Airlines, Spring Airlines and Juneyao Airlines, who presented an average reduction of over 4% in per seat per mile emissions in that period. Studies from ICCT suggest that a major contributor to these reduced emissions is the increased usage of the newer generation aircraft. Usage of newer generation aircraft such as the Airbus A320-200N, A321-200N, A350-900 and Boeing 787-9 has increased since 2020 whilst utilisation of older generation aircraft has reduced. 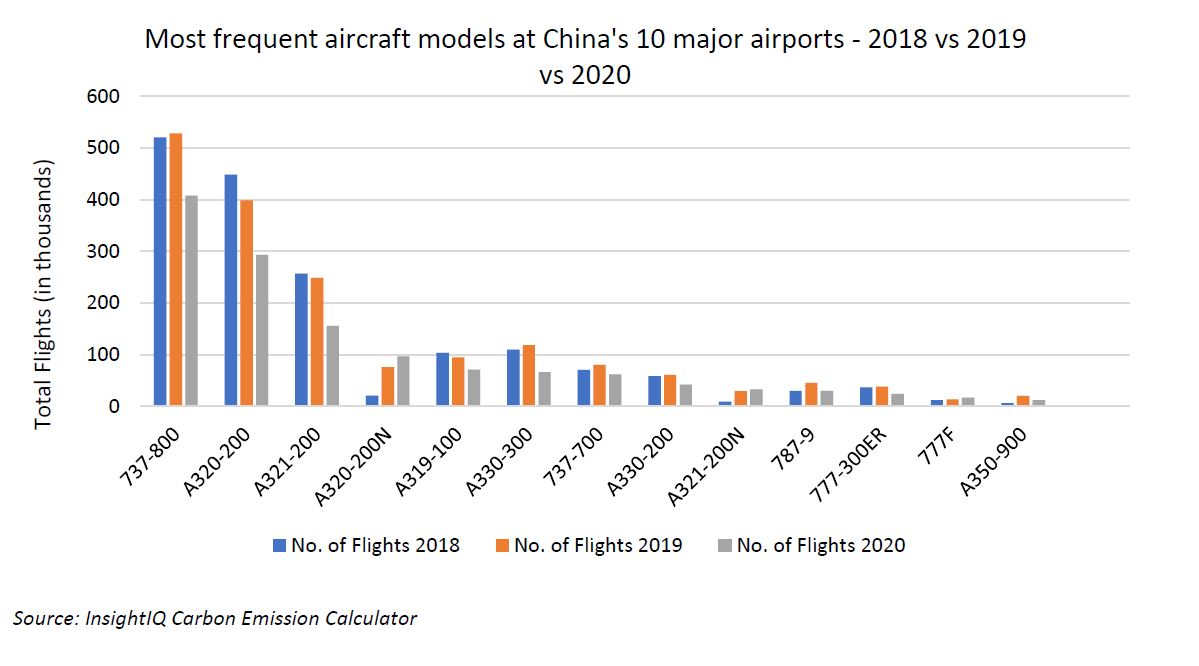 Hainan Airlines and Shanghai Airlines have presented a reverse of this trend, showing an increase in their per seat per mile emissions. This is primarily driven by ageing fleets at these operators, centred on the Boeing 767-300, Airbus A330-200, Boeing 737-800. 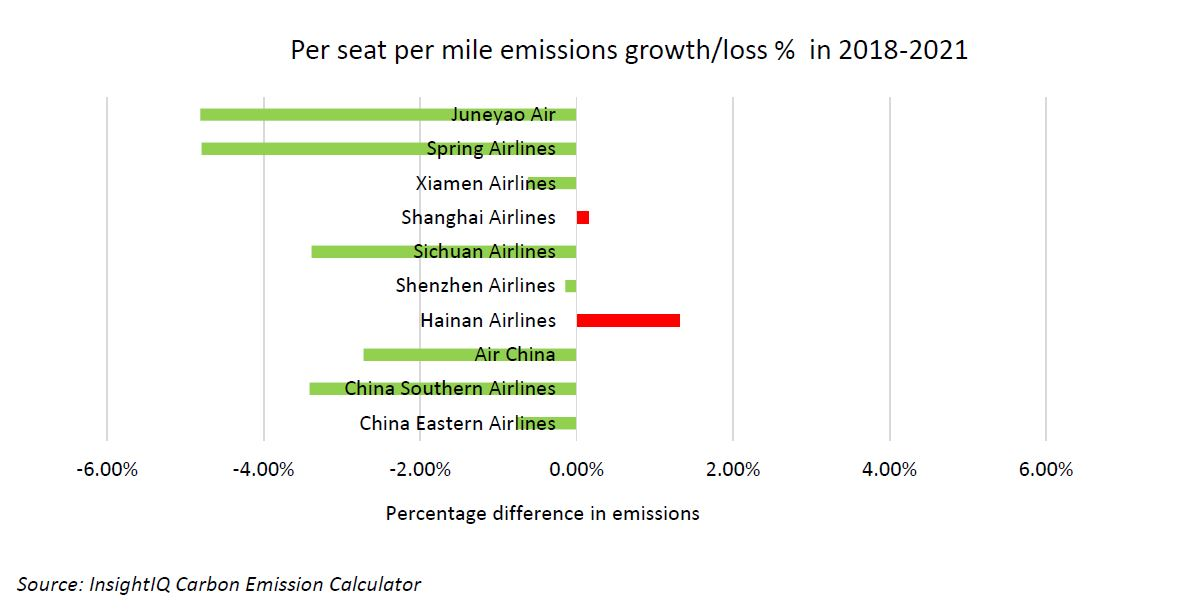 The ongoing easing of travel restrictions on domestic travel in China is set against the pre-set goal of halving aviation-related carbon emissions by 2050. Ensuring as few delays as possible are encountered in the re-structuring and the re-formulating of operational policies. Similarly, continued effective phasing out of older generation aircraft in China and replacing them with the newer generation aircraft is vital. Innovations and technical advancements made towards the feasibility of ensuring inexpensive use of biofuels like Sustainable Aircraft Fuel (SAF) for aircraft operations will be a game changer.