15 November 2022:  Aviation carbon emissions intelligence from IBA NetZero reveals that CO2 emissions from the commercial aviation industry averaged 142.07 grams of CO2 per-seat-per mile in October 2022 – a decrease of 0.1% month-on-month. This represents a 1.4% reduction in CO2 intensity year-on-year. The total number of flights in October decreased by less than 1% in comparison to September 2022.

Total emissions are up 18% year-on-year from October 2021 due to increased passenger confidence and vastly reduced Covid restrictions. Comparisons to pre-pandemic levels show the improvement in fleet efficiency. Total emissions are down 25% compared to October 2019, outstripping the decrease in flight numbers by 18.6% from the same period.

"We can take positives from a 1.4% reduction in CO2 intensity year-on-year, albeit it we know the industry’s 2050 targets will need that pace to accelerate. We see a widening momentum on the decarbonisation topic, with lessors also increasingly involved – for example, 32 members of Aircraft Leasing Ireland (ALI) signed an industry-first Sustainability Charter during ALI's first Global Aviation Sustainability Day event in Dublin on 27th October 2022.

This sets the basis for aircraft lessors to take a united position on sustainability on what has often, to date, been seen as an issue for airlines and OEMs. Shane O'Reilly, our Director for Sustainable Futures at KPMG and head of the working group leading the charter's drafting, said a combination of surveys and interviews with ALI members had been used to arrive at the set of principles across environmental, social, and governance priorities. We expect assertive lessors to take increasingly direct interventions on the decarbonisation topic, across a range of actions – from off-setting schemes and placing new propulsion small aircraft through investment in SAF production".

Chris Brown - Partner and Head of Strategy in Ireland, KPMG

The most popular commercial aircraft in October 2022

Insights from IBA NetZero indicated that the Airbus A321neo will show the highest growth in popularity amongst new generation aircraft types by 2025, thanks to its market-leading performance and efficiency. While the Boeing 737-800 retained its position at the top of IBA’s ranking, its share has continued to decline and has dropped by 1.1% since August 2022, now standing at 14.6% of total CO2 emissions. 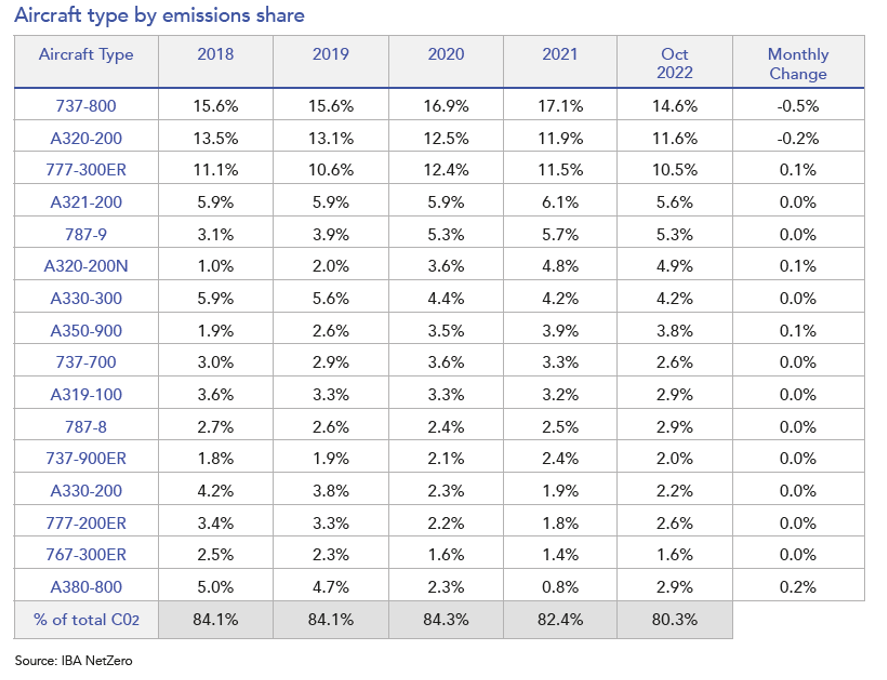 IBA expects that fleet renewal is currently the leading driver of change in this ranking. That said, operators continue to optimise their current generation fleets, as with Ryanair’s scimitar winglet retrofit programme. The 737NG family is generally falling behind in terms of overall operational efficiency compared to its new generation counterparts, notably the A320neo and A321NX, and 737 MAX family. Newer generation aircraft are, on average, around 20% more fuel efficient than their current generation counterparts, with aircraft such as the Airbus A321Nx proving particularly attractive to operators.

The LTAG (Long Term Aspirational Goal) is a huge step forwards, but which regions lead in embracing sustainability initiatives?

IBA NetZero assessed sustainability commitments on a regional basis, and  their emissions exposure under ICAO’s Carbon Offsetting and Reduction Scheme for International Aviation (CORSIA). CORSIA is the first global market-based measure for any sector, but will not become mandatory for ICAO member states until 2027. The voluntary status is therefore a solid indication of which regions and their airlines are best preparing for upcoming increases in the cost of compliance.

IBA’s data shows that Europe & CIS, the Middle East and Africa are all voluntarily including at least 85% of international flights in CORSIA. This means that CORSIA regulators will be able to calculate an accurate offsetting obligation for carbon emissions above the 2019-20 baseline of airlines, and they will subsequently be exposed to the actual costs associated with CORSIA well in advance of 2027. In contrast, airlines in North America, Latin America and Asia Pacific are lagging behind, with North America including just 38%. Whilst CORSIA is still in its trial phase, it serves as a signpost that the attitudes of regions to voluntary compliance remain adrift, even despite a coherent global target of net-zero by 2050. 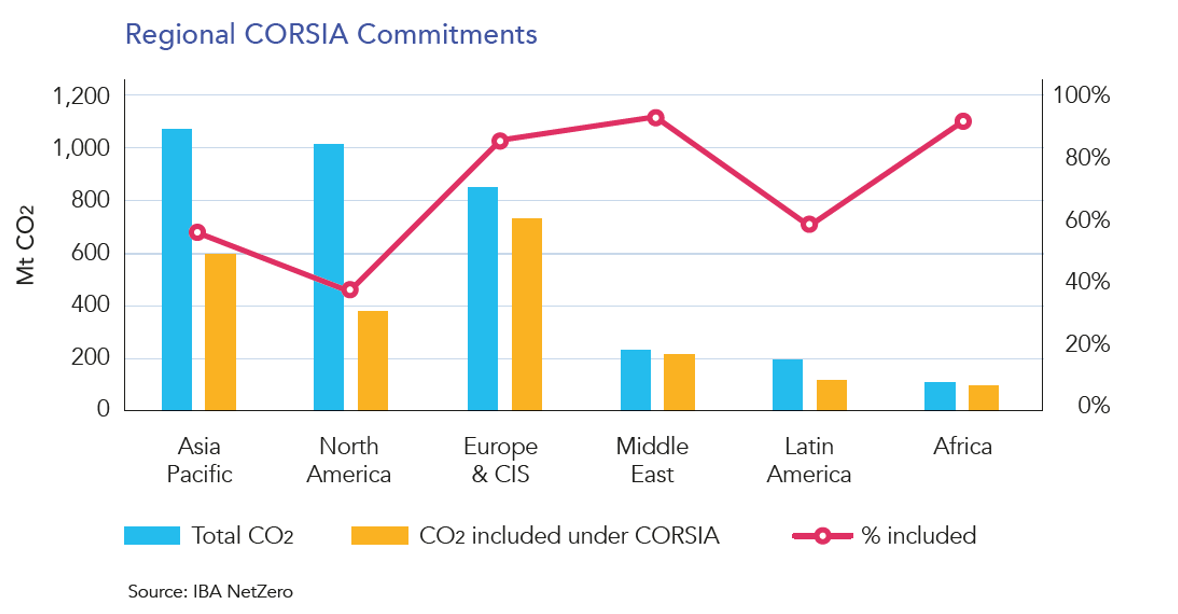 A fleet analysis sheds further light on the current state of global commitment to unilateral targets. Africa, and particularly North America (the region disclosing the least amount of international aviation to CORSIA) has the smallest share of next-generation single-aisle aircraft, along with the second-oldest average fleet age. North America has the most work to do to minimise the cost of compliance through an efficient fleet before CORSIA becomes mandatory for airline reporting in 2027. 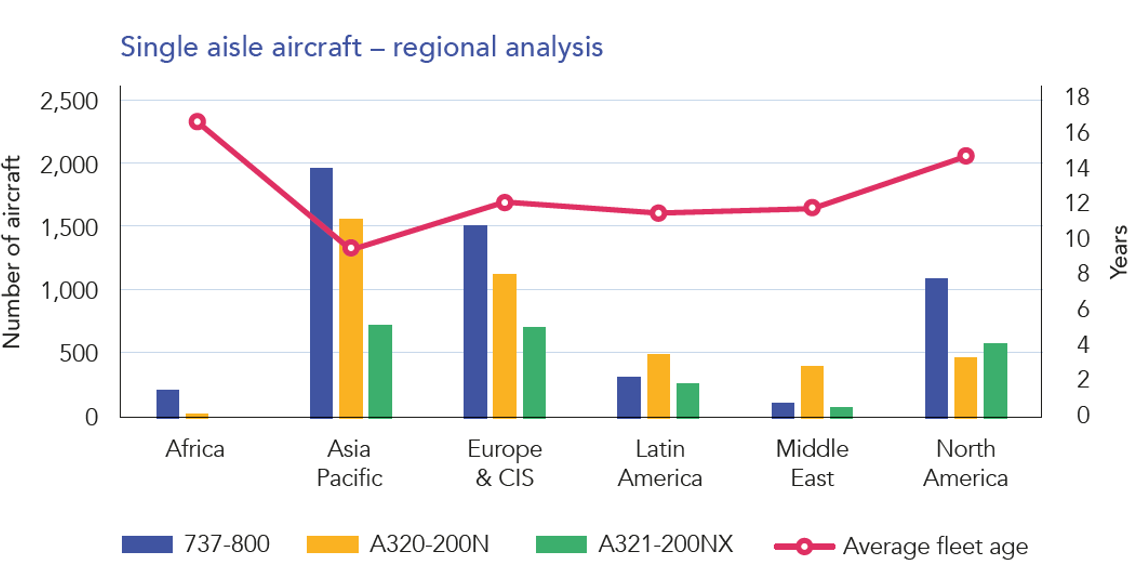 Fleet renewal is just one aspect of ICAO’s pathway to meet net-zero, and they place considerably more emphasis on SAF (sustainable aviation fuel) development and uptake, and the eventual impact of CORSIA.

In the news: what happened in sustainable aviation in October 2022?

IBA delivers the best of all worlds - deep aviation consultancy expertise, and cutting edge and actionable data insights, all delivered by a proven, expert team with a strong customer focus. An independent, innovative and forward-thinking business, IBA has over 30 years of heritage and experience in aviation. Named 'Appraiser of the Year' by their clients for five years, and most recently winning the Sustainable Technology award for its Carbon Emissions Calculator, IBA prides itself on its integrity, fierce independence, and continual innovation. The key to IBA’s success is its people – some of the best in the industry, based in multiple locations across the globe – real experts who are passionate about aviation and go the extra mile for their clients.