IBA Analyses the potential impacts of the Mitsubishi-Bombardier CRJ deal

IBA Group sees the Mitsubishi-Bombardier CRJ deal as a real positive for the SpaceJet program. This will see Mitsubishi taking over Bombardier's sales, maintenance, support and marketing functions. In IBA's view, strengthening MITAC's capabilities in support, sales and marketing will have real benefits in securing further orders and increasing investor confidence in the aircraft.

The SpaceJet is a technologically advanced aircraft with latest generation engines and with the recent design changes, will be well placed to penetrate the US market. The newly announced M100 aircraft has been developed with the US market in mind and will feature a 76-seat three class layout option with an MTOW of 86,000lb.

The US regional feeder fleets are restricted to 76-seat aircraft with an MTOW of 86,000lb or less. This could place the M100 in a strong position, as its primary new generation competitor, the E175-E2, is currently overweight. This has led operators to continue ordering the older technology E175 variant to fit within the scope clause.

The MRJ has faced challenges since its inception, with a significant re-design required at a relatively advanced stage and a series of announced program delays. Improving the sales and marketing focus and the customer support offering should drive further orders; particularly with a new model that looks set to open up the US market. With 50% of the in-service regional jet fleet residing in the US according to IBA.iQ fleets, this is a key market for regional aircraft OEMs.

Despite the news being a positive for the SpaceJet, unfortunately the same cannot be said for the Bombardier CRJ. Although the current backlog will be fulfilled by Bombardier and spares and component support will continue, production is expected to end in the middle of next year. 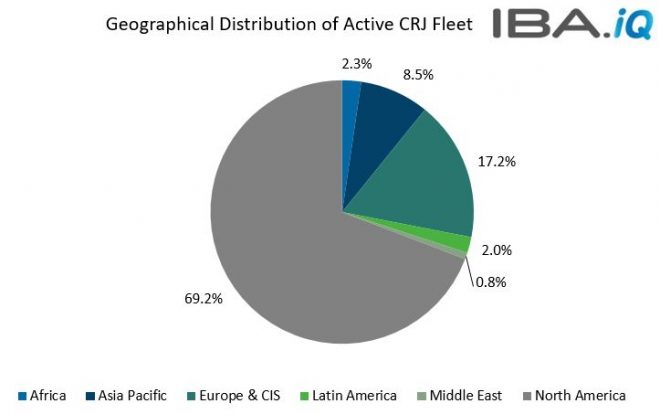 The success of the CRJ family was largely driven by the US market, with over two thirds of the active fleet currently operated in North America. As newer generation aircraft with greater efficiency, comfort and practicality have entered the market, the CRJ's backlog has dwindled. The current backlog is 42 aircraft according to IBA.iQ Fleets, of which 29 are destined for North-American customers including American, Delta and Chorus Aviation. Bombardier is taking no further orders for the CRJ, so these will be the last 42 aircraft to deliver.

The current distribution of CRJ aircraft by model is illustrated in the following chart. 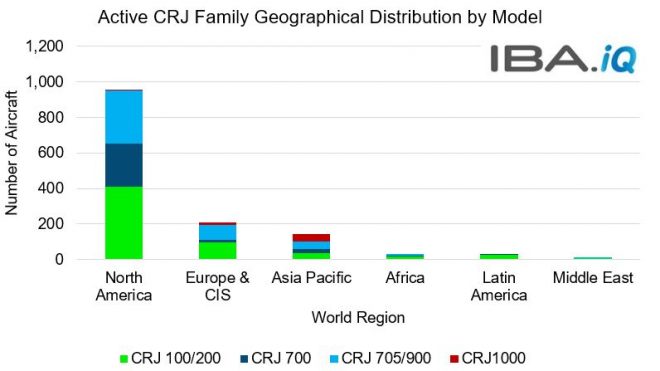 Analysis of the future market opportunities of the segment that the M100 occupies through the use of IBA.iQ Fleets, shows that there are around 3,000 regional jet aircraft with a seat capacity of between 30-99 seats. From a replacement perspective, there are a large number of ageing aircraft models such as the Bombardier CRJ 100/200 and the Embraer ERJ-145 that airlines could consider replacing in favour of up-gauging. In terms of direct competition, aircraft types such as the Embraer 175 and the Bombardier CRJ705/900 also represent aircraft that operators may consider replacing in favour of the M100.

North America is the region with the highest percentage of the global fleet of this aircraft market segment, occupying 63%. Notably the Asia-Pacific which is touted as a crucial emerging market in the global economy occupies just 9%. China notably is one of the countries within the Asia-Pacific region that may require a large number of regional jets in the forthcoming years to increase the level of connectivity between the countries secondary routes and city pairs and to feed the hubs.

There are a number of lessors with exposure to the CRJ family of aircraft depicted in the following table. 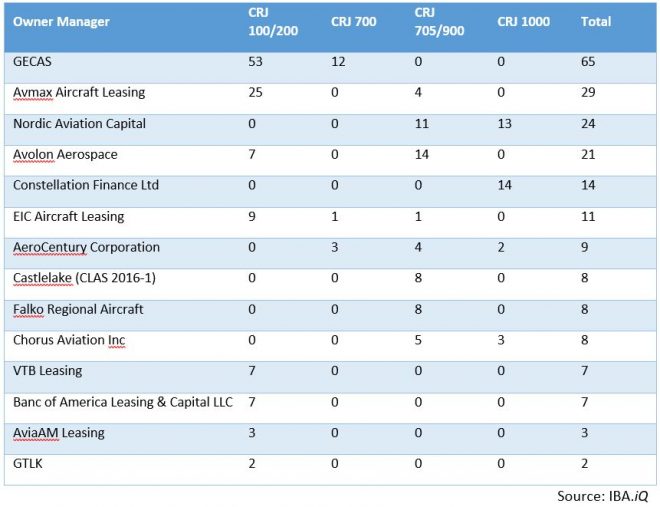 The future fleet plans of the US major feeder operators will have the most significant influence on value in IBA's view. With such a high concentration of CRJ aircraft in the US, the excess supply resulting from fleet replacement has the potential to increase secondary market availability, resulting in value and lease rate pressure.

The current lease rate profile of the CRJ 700 aircraft is depicted in the following graph. 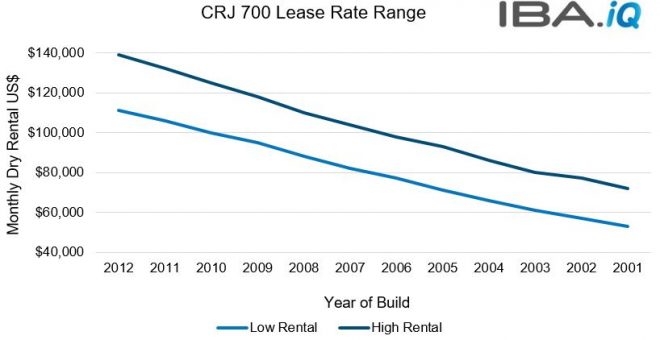 American looks set to keep the majority of its CRJ 700s in fleet, at least for the next few years, and will add more CRJ 900s from its backlog. We may see some aircraft leave the fleets of Delta and United Express however. United recently ordered 20 additional Embraer 175 aircraft with 19 options at the Paris Air Show. IBA expects these aircraft will replace some of United's older CRJ 700 aircraft. We may see some CRJ 700 and CRJ 900 aircraft coming out of Delta also as it takes delivery of its Airbus A220-100 orders. As further aircraft enter the secondary market, we may see pressure build on trading values due to the high concentration of aircraft in the US feeder carriers.

The following graph shows the future base and soft value profile of a typical 2007 vintage Bombardier CRJ 700 aircraft. If we see aircraft exiting the US carriers in significant numbers, this could push values down towards soft levels, although we do not expect this in the near-term. IBA's current half-life Market Value for this aircraft is US$ 8.7 million.

IBA has not changed its base nor soft value profiles as a result of the recent announcement, as we do not see any change to the underlying economic value of the aircraft. The CRJ program has suffered from declining demand over a number of years, culminating in the recent announcement that production will end. This fact is already reflected in IBA's values.

If you have further questions, comments or feedback please contact: Mike Yeomans 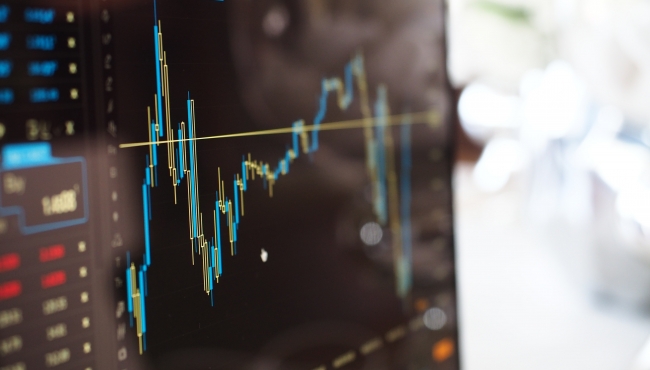 Impairment of Asset Values Set to Become a Real Issue

After a long period of stability and growth in the aviation industry the prospect of asset impairment is starting to rear its head, according to Phil Seymour, the CEO of IBA.